Hedge funds in October had yet another terrific run, with returns upwards of 2% almost across the board. The composite Eurekahedge Hedge Fund Index rose 3.3%1 for the month, taking the year-to-date gains (15%) past those achieved during the entire year in 2006 (14.4%). Equity- and commodity-focused strategies drove this robust performance during the month, as expectations of further cuts in US interest rates, and the consequent weakening of the US dollar against major currencies, lent strong support to the respective underlying markets.

In terms of regional performance, fund returns in even the weaker (compared to markets elsewhere) Japanese markets during the month were a decent 0.8%. Unsurprisingly, gains from hedge fund allocations to other regions, particularly emerging Asia, were even stronger, as the lowered interest rate situation helped boost risk appetites in spite of mixed earnings reports and the inflationary pressure from rising commodity prices. As can be seen from the graph below, most regional fund allocations repeated or bettered their performance in September, with the year-to-date returns for Asia ex-Japan standing at an off-the-scale 34.8%. 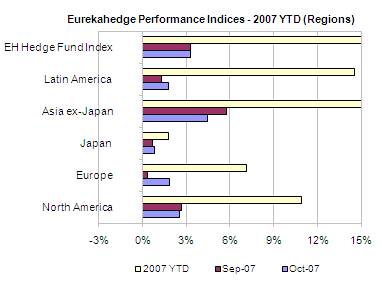 Equity and bond markets rallied in October, largely ignoring the mixed third quarter earnings data, as the prospect of lower interest rates gave a fillip to risk appetites, and drove bond yields lower . The S&P 500 (1.5%) finished October in positive territory, while the yield on the US two-year Treasury note fell to 3.69%, its lowest in over two years.

In the currency markets, expectations of lower interest rates led to wide rate differentials, and by extension, a weaker US dollar against the euro, the British pound and other major currencies. On the other hand, the Japanese yen depreciated against major Asian currencies as weaker Japanese economic data rendered an increase in the Bank of Japan’s key interest rate less likely. The weaker yen in turn led to increased carry trade activity during the month.

Energy and precious metals prices rallied to record highs amid a weaker dollar and heightened tensions in the Middle East; crude oil prices hit US$94 per barrel at month-end, while gold prices breached US$800 per ounce.

These broad market trends provide the basis for explaining the performance of various hedge fund strategies during October. A detailed, region-wise analysis of the underlying factors driving the month's returns is taken up in the following sections of this write-up. 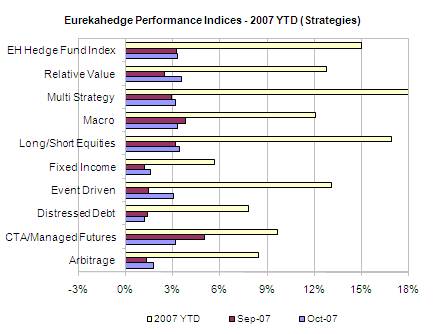 The Eurekahedge North American Hedge Fund index finished October up an impressive 2.5%, driven in the main by trend-following and value-trading in the energy, currency and interest rate markets. As can be seen from the graph below, relative value, macro and managed futures funds all returned upwards of 3% for the month. 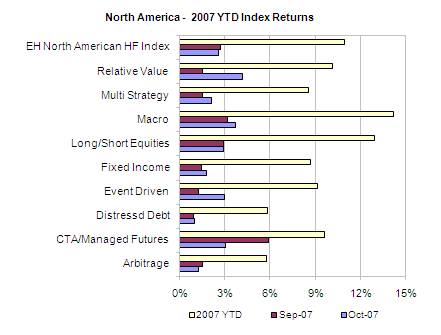 That said, the month witnessed sharp up and down trends in both the equity and treasury markets, given mixed corporate earnings data (weak financials, strong tech stocks). This was also evident from the advances made by the S&P500 (1.5%) and that of the NASDAQ composite (5.5%). Concerns over the US mortgage markets also persisted, as most major investment banks reported significant losses in the third quarter; this is reflected in the relatively subdued performance of distressed debt funds during the month (1%). Some of this choppiness in the markets has also benefited short-term trading, with arbitrage managers posting gains to the tune of 1.2%.

The Eurekahedge European Hedge Fund Index was up a strong 1.8% in October, as most strategies fared well during the month. In the underlying markets, the FTSE 100, after experiencing a considerable amount of volatility during the second half of the month, rose by 3.9%. The euro touched record highs against the US dollar and closed up 1.5%, while the GBP, after touching a 26-year high, ended the month up 1.7% versus the dollar. In the fixed income markets, shorter bonds were outperformed by their longer counterparts. 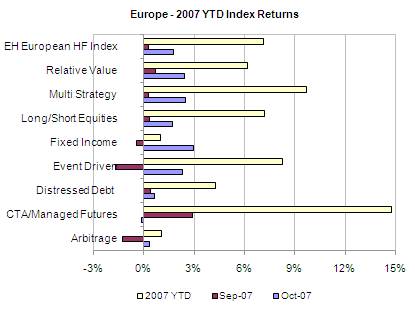 The best hedge fund returns during the month came from fixed income funds (3%), as managers profited from having positioned their portfolios in anticipation of the ECB keeping interest rates unchanged for the rest of this year. A marked decline in the price of CDOs also provided fixed income managers with healthy opportunities. Event-driven managers returned 2.3% during the month, benefiting from special situations in the regions such as the Porsche and Volkswagen story, among others. On the whole, the acquiring companies looked to be in good shape, with healthy balance sheets, and therefore were fruitful investments on the long side.

Long/short managers were up 1.8% last month, making gains from both long and short positions. Short positions in banks proved profitable, owing to rather tight credit conditions in the region, while long-trades in sectors such as telecom, among others, fetched decent gains. Relative value managers recorded returns averaging 2.4%, as managers focusing on inefficiencies in the real estate and energy sectors, performed impressively. Relative value equity-linked quant funds also performed well during the month.

Multi-strategy managers (2.5%) were among the better-performing strategies last month, as most investment styles fared well, while arbitrageurs (0.4%) and CTAs (-0.1%) ended the month relatively flat.

Japanese funds had a decent month in October, as the Eurekahedge Japan Hedge Fund Index ended the month up 0.8%. Despite the high volatility and wide swings across asset classes (due to subprime tensions cropping up once again in the US) during the month, Japanese markets fared rather well.

Regional equities, which started the month on a strong note, turned volatile around mid-month, but staged a decent recovery soon after. The Nikkei ended the month down 0.3%, while the Topix gained 0.2% during the month. Long/short managers registered returns averaging 1% for the month, as gains were reali sed from short positions, particularly in the steel sector, among others; however, managers suffered losses from shorts in credit sensitive stocks, which rallied strongly in course of the month.

The yen also witnessed wide swings (touching a high of 117.9/US$ and a low of 113.2/US$), and ended the month marginally down against the US dollar, as the Bank of Japan left interest rates unchanged on the back of weaker-than-expected regional economic data. This, among other things (such as equity trades), went some way in bringing down the returns of multi-strategy managers, who lost 1.8% during the month. 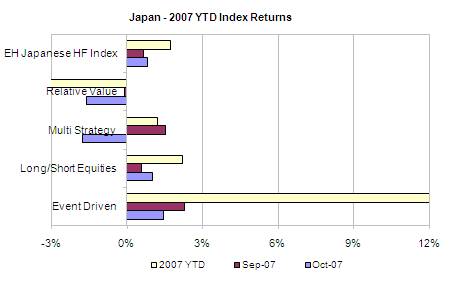 Event-driven funds were among the best performers during the month, returning 1.5%, as certain companies (particularly in the retail, steel and auto sectors) that had announced alliances in the last few months, were likely to be a part of some full-fledged mergers in the near future.

Hedge funds investing in Asia ex-Japan had a healthy run in October, with the Eurekahedge Asia ex-Japan Hedge Fund Index advancing 4.4% during the month. This was despite an increase in global volatility, as regional markets, which rallied strongly during the month, showed strong resilience to global issues. 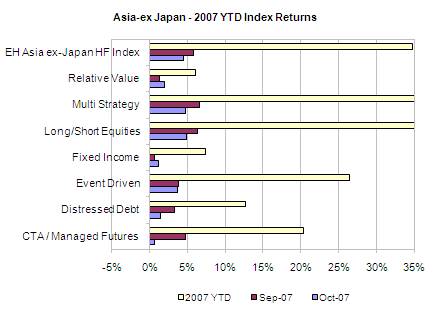 China was among the best-performing regions for hedge fund allocations, during the month. The Eurekahedge Greater China Hedge Fund Index advanced an impressive 5.1%, on the back of rallying equities and strong appreciation in domestic currencies. The Hang Seng and China’s H-shares advanced a solid 15.5% and 18% respectively, getting support from the Fed’s aggressive rate cuts coupled with liquidity inflows. Furthermore, the Shanghai Composite Index rose by 7.3%, working to the benefit of long/short managers in the region, who were up 4.8%. Multi-strategy funds (6.3%) contributed a larger portion of the region’s returns, as managers made healthy gains from equities and commodity-linked trades, among other things.

The Eurekahedge India Hedge Fund Index advanced an even more impressive 7.8% in October, as underlying markets rallied strongly. Long/short managers returned 7.9% during the month, making healthy gains from the strong rallies (despite high volatility due to domestic regulatory factors) across domestic equities (the BSE Sensex was up 14.7%). Multi-strategy managers fared well too (6.1%) benefiting, to some extent, from equities and from the strengthening Indian rupee (which strengthened by over 1% against the US dollar).

Australian managers had a decent run last month and were up 1.4%. Long/short equity managers led the way, with returns averaging 2%, benefiting from the decent performance of equities in the region. The ASX 200 advanced 2.8% during the month, as sectors such as financials and energy did particularly well. Event-driven players returned 1.3% for the month, taking advantage of special situations in the regional corporate arena (such as Coca-Cola Amatil selling off their South Korean business, for instance). CTAs in the region were up 0.6%, as currency movements (Australian dollar rose by 5.1% against the US dollar) and commodities posed good opportunities for managers during the month.

Hedge funds in Korea and Taiwan ended the month with returns averaging 3.9% and 2.2% respectively; the Kospi finished the month up 6.1% (as the energy and ship-building sectors performed well, while banks were the month’s underperformers), while Taiwan’s stock index advanced 3.2% during the month.

The Eurekahedge Latin American Hedge Fund Index returned a healthy 1.8% this October, with all strategies ending the month in positive territory.  Macro managers (3.8%) registered the best returns in the region, on the back of tame inflation recorded in September, coupled with impressive sales numbers (due to increasing incomes). The Brazilian real and the Chilean peso, which strengthened significantly against the US dollar (5.3% and 3.1% respectively), also worked to the advantage of macro managers in the region. 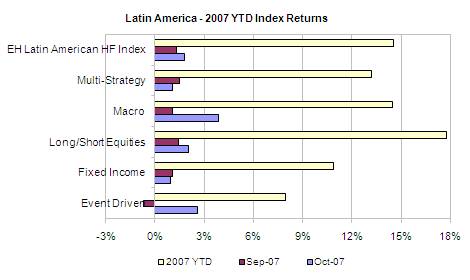 Event-driven funds (2.6%) fared well too, despite many IPOs in the region having fared not-so-well. The month saw the spreading of several rumours about potential consolidation, especially in the Brazilian real estate market, which created short-term opportunities for event-driven players during the month. Equities in the region rallied strong, as the MSCI Latin America Index rose by 11.5%, working to the benefit of long/short managers who ended the month up 2.1%. Short positions, on the whole, eroded gains that came from the long book.

The markets in November continue to be characterised by volatility, given that third quarter earnings news have not yet been fully reported and that the extent of credit exposure among major investment banks and bond insurers remains uncertain.

The Federal Reserve, on the other hand, has met market expectations in its meeting of 31 October by announcing a 25 bps cut in its short-term interest rate, while also identifying the risk of an economic slowdown on the one hand and inflationary pressures on the other (given surging oil prices, which breached US$100 per barrel during early November).

We expect volatility to persist in the coming months, and believe this to be a positive trading environment from a hedge fund’s perspective. This set of factors has created opportunities on both the long and short side for equity-focused managers, as the market swings overshot specific names in one direction. Clearly trending markets (India, China, etc) and asset classes (energy, forex, etc), on the other hand, afford an expanded opportunity set to trend-following and opportunistic managers.

1 Based on 77.58% of the funds reporting their Oct 2007 returns as at 20 Nov 2007.
2 The Eurekahedge Japan Hedge Fund Index is a separate index and derives its value not only from the actual performance of the listed strategies for the investment region but also from the strategies which are not listed (due to strict Eurekahedge indices guidelines) but having the same investment mandate.
[Top]