This article provides an overview of Taiwanese participation in HKEx's securities and derivatives markets by utilising the results of recent HKEx's surveys and other relevant data available. It also describes Taiwan's other financial activities in Hong Kong.

Taiwan ranked 20th among the world economies in 2004 with a gross domestic product (GDP) that amounted to US$305 billion1. In Asia, Taiwan was the fourth-largest economy, after Japan, Mainland China and Korea. Hong Kong was fifth. During the past decade, Taiwan exhibited high positive economic growth except for a contraction of 2.2% in 2001 (Figure 1). The leading stock market index, the TAIEX, dipped to 3,585 points in the same year (Figure 2). 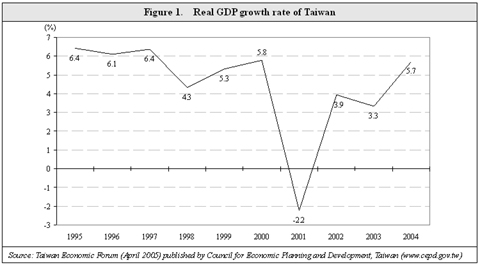 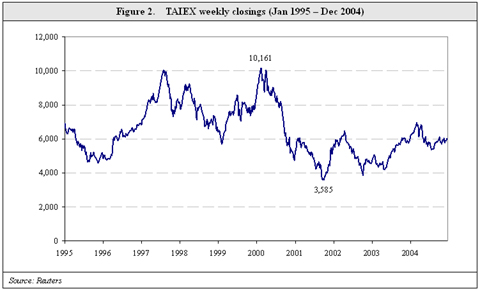 According to the statistics of the World Federation of Exchanges (WFE), the market capitalisation of the Taiwan stock market was US$443 billion (145% of its GDP) at the end of 2004, ranking 13th in the world. Though not large, the market was active in trading–it ranked second in Asia and 10th in the world in terms of share trading value in 2004. The annual turnover ratio2 was high–162% in 2004, the fourth highest in the world. In comparison, Hong Kong ranked ninth in terms of market capitalisation and 16th in terms of share trading value. The annual turnover ratio of the Hong Kong market in 2004 was 51%, ranking 24th in the world.

Taiwan also has a rather active derivatives market. The Taiwan Futures Exchange (TAIFEX) established an annual volume record of 59 million contracts in 2004, ranking 20th in the world, according to the statistics of the Futures Industry Association. In comparison, Hong Kong ranked 35th.

Taiwan is a major investor in other Asian economies. In 2004, the approved outward (direct) investment to Asian countries amounted to US$8.2 billion3 , with the majority in Mainland China. This accounted for 80% of its total outward investment, representing about 3% of its GDP.

The annual HKEx Cash Market Transaction Survey gathers information on the contribution of trading value in the HKEx cash market by origin. Taiwan was separately identified in the survey for the first time in the 2001/02 survey. As shown in Figure 3, the relative contribution from Taiwan to total cash market trading diminished over the past three years to just 0.2% in 2003/04. 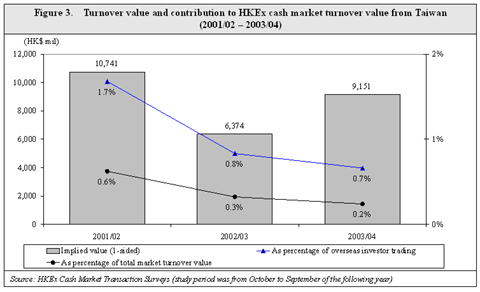 In May 1998, the Hong Kong Futures Exchange (HKFE) launched Taiwan equity index products, the HKFE Taiwan Index Futures and Options. However, trading of the products was inactive and it was suspended in September 1999. 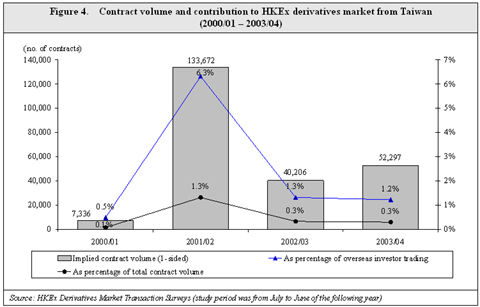 As at the end of May 2005, a total of 32 listed companies in Hong Kong - 23 on the Main Board and nine on the Growth Enterprise Market (GEM) - had their majority interests coming from Taiwan, representing 2.9% of the total number of listed companies and accounting for 1.6% (HK$105.7 billion) of the total market capitalisation. During the first five months of 2005, the aggregate turnover value of these Taiwanese stocks accounted for only 0.72% (HK$12.0 billion) of the market total. Nevertheless, among them, one stock, Yue Yuen Industrial (Holdings) Limited, has been a Hang Seng Index constituent since 9 June 2003.

According to HKEx's internal records, there are currently 22 Stock Exchange Participants (SEPs) with Taiwanese interests, representing 4% of SEPs by number. Among them, three are also Futures Exchange Participants (FEPs) and six have sister companies which are FEPs. These Taiwanese brokers are mostly medium- or small-sized brokers in terms of market turnover, contributing in aggregate about 2.2% of cash market trading and 5.5% of derivatives market trading4.

Other Taiwanese Investment in Hong Kong 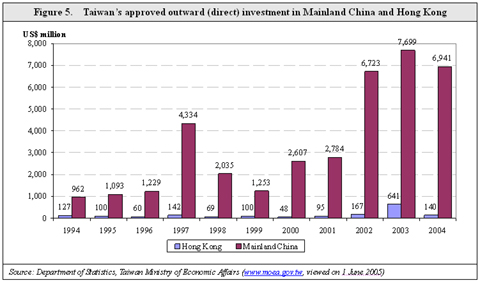 The Taiwanese presence among authorised institutions (comprising licensed banks, restricted license banks and deposit-taking companies) in Hong Kong gradually increased from seven in 2000 to 15 in 2004, as shown in Figure 6. In terms of number of licensed banks in Hong Kong, Taiwan (14 in number) ranked first in 2004, followed by Mainland China (13) and Japan (12). However, statistics on the business activity of the Taiwanese authorised institutions in Hong Kong are not publicly available. 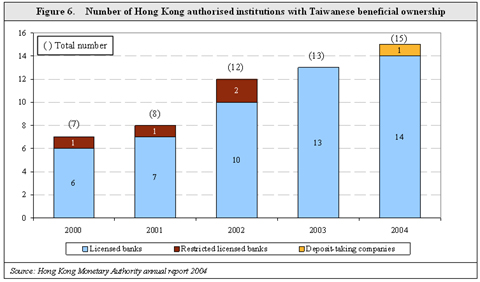 According to the Taiwan Stock Exchange (TWSE), the majority of securities trading in Taiwan comes from domestic individual investors, albeit that the contribution has decreased gradually from 88% in 1999 to 76% in 2004 (Figure 7). As at the end of 2004, Taiwanese individuals accounted for 48% of the total share ownership in Taiwan-listed stocks. 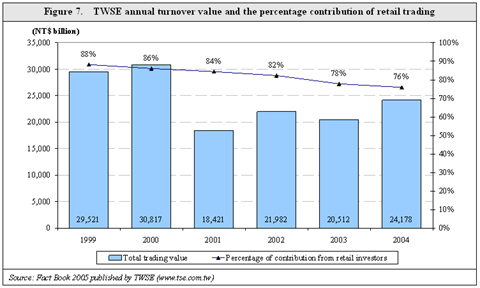 Taiwanese individual investors are also the major contributor to derivatives trading on TAIFEX, though the percentage contribution has also decreased over the years - from 94% in 1999 to 66% in 2004 (Figure 8). As at the end of 2004, the number of accounts of Taiwanese individuals in TAIFEX reached 1,016,348 - 99% of the total number of TAIFEX investor accounts. 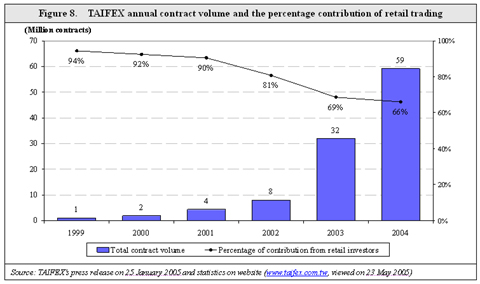 The high retail participation rate in both the Taiwan securities and derivatives markets is believed to be a major factor underlying the high level of trading in both markets. However, this did not translate into high Taiwanese participation in the Hong Kong markets. This may relate to the fact that it is difficult for retail investors to invest directly in overseas markets.

Taiwanese investors are only minor users of Hong Kong's stock and derivatives markets. While Mainland China has attracted much direct investment from Taiwan, the Hong Kong stock market, though with many listed Mainland enterprises, has gained little Taiwanese portfolio investment.