This inaugural edition of the Eurekahedge asset flow report collates historical assets under management (AuM) information on a sample of close to 6,400 hedge funds and 2,700 funds of hedge funds listed in the Eurekahedge Alternative Investment databases, in an effort to estimate the size and nature of asset flows in the global hedge fund industry.

In view of the nature of information collection in the hedge fund space, a lag of a month is to be expected in our coverage of asset flows. As a result, this report includes quarter-wise asset flow estimates up to December 2007. As this is the first edition of the report, we have also included our estimates on flows since December 2005. Going forward, this will be a regular feature of our monthly newsletter, together with our existing comprehensive reportage on hedge fund performance trends. For this month, we have also included the month-to-date estimated asset flow figures1 for the latest reported month (January 2008), which will be updated in a full-fledged report in the coming month as AuM data become fully available. Click here for a brief on the January 2008 month-to-date asset flow estimates.

In the report, after accounting for the growth/decline in assets owing to performance, asset flows have been broken down into the following three categories:

The hedge fund asset flow data are further broken down by strategy employed, region of investment and manager location.

Asset inflows reached record levels in 2007 when they hit US$351 billion, a 66% increase from those seen in 2006. We currently estimate the total size of assets in the global hedge fund space at US$1.8 trillion, two-fifths of which is made up of fund of funds assets (about US$752 billion). The rate of asset growth has been particularly brisk in the past two years, with average quarter-on-quarter growth at 4.8%, and a rise in the year-on-year growth rate (17% in 2006 and 13% in 2007). This is again owing to the broadly bullish trends seen in the underlying markets over the period in question.

Figure 1 below depicts the broad asset growth trends seen in the hedge fund, fund of funds and long-only spaces in the last two years. Long-only vehicles saw both prominent growth and a significant decline in assets, reflecting the broad upward trends in global equities during the second half of 2006 and the first three quarters of 2007 on the one hand, and uncertain and weak markets towards end-2007 on the other. Funds of funds, however, have seen steadier growth and only marginal declines in the last two years.

The direction of hedge fund asset flows and asset growth during 2007 was largely shaped by fund performance and subscriptions/redemptions, while inflows owing to fund start-up activity (approximately US$4 billion) had only a marginal impact on asset growth. Net industry inflows during the year reached record levels at US$170 billion, which translates into a 15% growth in the quantum of inflows year-on-year (inflows in 2006 were close to US$148 billion) and a 13% rise in total assets from US$1.45 trillion as at end-2006 to the current US$1.65 trillion. These numbers mask some turbulence during the latter half of 2007; inflows during the first three quarters of the year added up to US$215.5 billion, which was nearly twice the size of inflows during the same period in 2006, but were offset by net outflows to the tune of US$45.5 billion during Q4 2007.

Figure 2 below charts the changes in the last eight quarters in total hedge fund assets through performance-based growth/decline on the one hand, and inflows/outflows driven by new launches, closures, additional subscriptions and redemptions on the other.

In terms of location of fund managers, the US has seen the biggest rise in assets in absolute terms (US$111.2 billion) since December 2005, while assets in Asia- and Europe- based managers have nearly doubled in the past two years. This is understandable, given the rise in the number of large global firms (quite a few of which are based out of the US) setting up new offices in promising markets in Asia, Europe and Latin America.

On the other hand, the flight to quality in the wake of the US credit market meltdown during mid-2007 and its spill-over effects on other asset classes, meant that some of this recent influx of liquidity was withdrawn from the markets and US- and Europe-based managers as well as US- and Europe-focused funds accounted for a big portion of fund redemptions and performance-based declines. In the fourth quarter of 2007, US- and Europe-based managers lost assets to the tune of US$57 billion in performance-based declines, and another US$55 billion in redemptions. This is evident from Figure 3 below, from the quarter-wise growth trends seen through a constructed index of asset growth (AGI) that charts the rise in value of US$100 invested at the start of 2006.

On the other hand, funds allocating to North America and Europe lost US$68 billion through negative performance and another US$54 billion in redemptions during the same period. On the flip side, emerging market allocations have steadily captured a bigger share of total assets vis-à-vis their developed market peers; case in point – total allocations to Asia have more than doubled over the last eight quarters, compared to just a 33% rise in US-invested assets. Figure 3 below takes a closer look at quarter-wise asset growth in each of the broad regions of hedge fund investment.

And lastly, asset flows among hedge fund strategies mirror movements in the underlying markets: distressed debt and event-driven managers saw prominent inflows in late 2006 and early 2007, but also steep declines in Q4 2007 as these strategies were directly affected by declining trading volumes and heightened volatility in the credit and high-yield markets. Arbitrage, equity long/short, and most notably, multi-strategy funds, on the other hand, have been able to profit from long energy and short equity positions in the past few months, and have seen steadier inflows and outflows. Figures 4 and 5 below chart this growth and decline in assets among key hedge fund strategies over the last eight quarters. 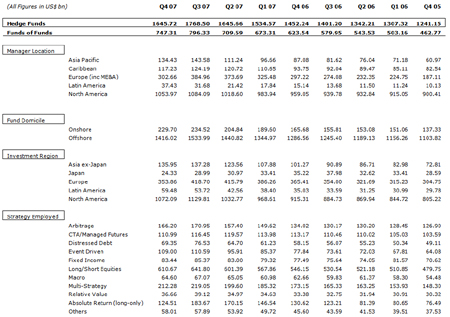