The Latin American hedge fund space has seen remarkable growth over the past decade. The number of funds as at September 2008 was nearly four times that as of end-2000, while assets over the same period recorded an over 21-fold increase. Based on the data of 462 funds1 in the Eurekahedge Latin American database, we estimate there are currently 403 operational hedge funds, managing about US$52 billion in assets, across the region’s hedge fund industry as at September 2008. The figure below gives a snapshot of the industry growth over the past decade. 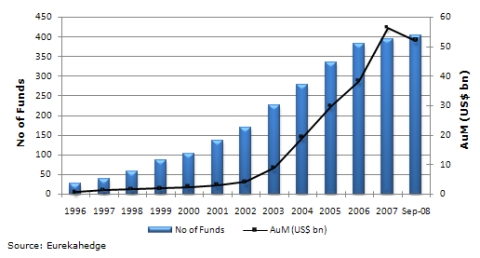 After seeing robust growth over the past decade, Latin American hedge funds, like most others, faced rough weather in 2008. This was amid the credit crisis, which originated in the US, spread to most other economies, and took a toll on both the underlying markets and hedge fund returns across the board. Despite such events, the Eurekahedge Latin American Hedge Fund Index lost only 1.3% for 2008 YTD (up to September 2008), suggesting hedge fund returns across the region to be relatively resilient to turmoil in the markets.

Going into November, markets continue to trend in a similar fashion to the previous month, with the MSCI Latin American Index down another 8.9%2 for the month-to-date, as investors shunned emerging markets on fears of a deepening global recession and a further decline in commodity prices. Furthermore, in the regional currency markets, the Brazilian real weakened by another 7.7%3 against the US dollar. As economies across the board are slowing down further, concerns on the falling demand for commodities are pulling down inflation forecasts in tandem with declining commodity prices, thereby having a further negative impact on regions such as Latin America, which thrive on commodity exports.

However, at such times, despite worsening economic outlooks and downward revisions in growth forecasts across the board (Merrill Lynch lowered its growth forecast for Brazil from 3.1% to 2.9% for 2009), we see some pockets of opportunities that could work in favour of managers allocating to the region. For instance, we expect some managers to benefit from movements such as those in the currency (Brazilian real depreciating against the US dollar) and commodity markets (declining commodity prices amid slowing of global growth and falling demand). The equity markets in the region also look attractive – with low valuations offering value-investing managers with attractive bets, and falling commodity stocks affording long/short managers with opportunities on the short side. Based on these factors, among others, we remain fairly optimistic about hedge fund returns across Latin America over the medium term, and expect them to pick up further once the dust from the current economic storm settles.