Hedge funds largely outperformed the underlying markets in October, with the Eurekahedge Hedge Fund Index down by a marginal 0.3%1 during the month as opposed to larger decreases seen in the markets globally – the MSCI World Index lost 1.85% through October. The modest performance by hedge funds was seen in the face of a mixed month for most asset classes, as equities and commodities performed strongly earlier in the month but lost value towards the end, while the trend was the opposite for bonds and the US dollar. However, the month was significant, as it brought to an end the longest run of back-to-back positive returns since 2007. The Eurekahedge Hedge Fund Index gained for seven consecutive months from March to September, bringing the October YTD returns to 16.1% – the best first ten-month of returns since October 2003.

Most observers had been predicting a market correction in the run up to October amid speculation that the strong rallies seen in the underlying markets were not supported by economic fundamentals. Although October initially witnessed a continuation of the strong market risk appetite, declines in US consumer spending, weaker housing and manufacturing data contributed to a turnaround in investor confidence, leading to sharp declines in most market indices.

Among the regional mandates, Asia ex-Japan hedge funds were the biggest winners for the month, as the Eurekahedge Asia ex-Japan Hedge Fund Index recorded a 1.45% rise, bringing the October YTD figure to a massive 31.1%. Most of the long gains seen in Asia ex-Japan were from China, as the MSCI China Index gained a strong 6.4% through the month, while most of the other larger markets remained more or less flat. 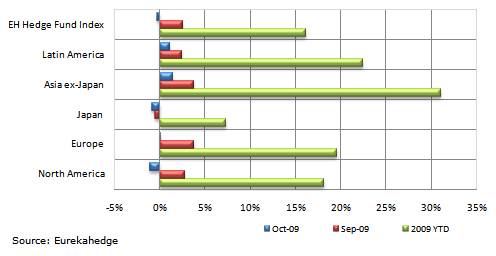 Equity markets performed in a volatile fashion through October, with North American and European indices losing value, while those in emerging markets, with the exception of China, mostly remained flat to slightly negative. The fixed income sector showed an opposite trend in October; however, the turnaround in risk appetites later in the month resulted in...