Industry assets witnessed incremental growth in the 2004–2007 period, registering a three-fold increase over these three years. This tremendous growth was underscored by the performance of the Eurekahedge Latin American Hedge Fund Index, which gained 103.23% over the period. The industry witnessed a downturn during the credit crunch and the subsequent financial crisis; however, managers delivered admirable downturn protection throughout this period with an average loss of only 4.93% at a time when the average global hedge fund was down 10.78%. Assets under management fell to US$39.3 billion by March 2009 before posting a strong recovery in the last three quarters of 2009.

Figure 1 shows the growth in the Latin American hedge fund industry since 2000.

Figure 1a: Industry growth over the years 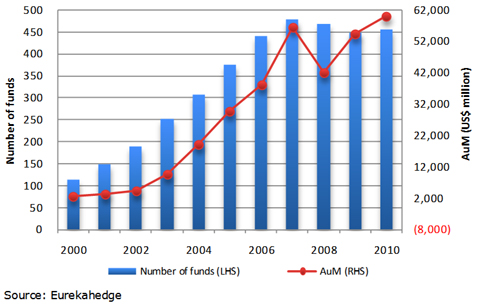 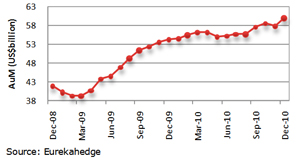 Throughout 2010, Latin American hedge funds maintained the trend of growth established in the last three quarters – the Eurekahedge Latin American Hedge Fund Index delivered a gain of 9.84% in 2010. As at December 2010, industry assets stood at a historical high of US$60 billion, which represents a 52.7% increase since March 2009. While most of the growth was generated through…