Hedge funds were up for the eighth consecutive month in February amid healthy upward movement in most markets. The Eurekahedge Hedge Fund Index gained 1.09%1 during the month, bringing its year-to-date return figure to 1.27%. Market sentiment was buoyant through most of the month, leading to rallies in underlying markets – the MSCI World Index was up 2.75% in February.

Among the regional mandates, the best performance was delivered by Japanese hedge funds, gaining 2.62% in February. Japanese hedge funds investing in financial and insurance stocks, as well as material and mining companies, posted healthy gains – the Nikkei 225 was up 3.77% during the month. Returns from European hedge funds were also positive in February, up 0.55%, while Eastern Europe & Russia-investing funds gained 1.22%. Asia ex-Japan hedge funds witnessed losses to the tune of 1.32% amid declines in underlying markets – the MSCI Asia Pacific ex Japan Index was down 2.36%.

Most other hedge funds also delivered positive returns, with North American hedge funds gaining 2.16% in February. The S&P 500 was up 3.20% in the month, reaching a 32-month high in the third week of the month before declining slightly near the month-end due to heightened geopolitical tensions. Increased risk appetite during the first three weeks led to a sustained rally in the equity markets as better-than-expected corporate earnings and increasingly positive outlook on the global economy lifted market sentiment. North American managers in the merger & acquisition space also took advantage of healthy corporate activity. February was marked by a number of strategic takeovers, leveraged buyouts and spin-off announcements, with a number of funds benefitting from deals in the pharmaceutical sector such as Sanofi-Aventis’s acquisition of Genzyme and the Danaher-Beckman deal. February was the sixth consecutive month of positive returns for North American managers, with the Eurekahedge North American Hedge Fund Index gaining 14.60% since September 2010. 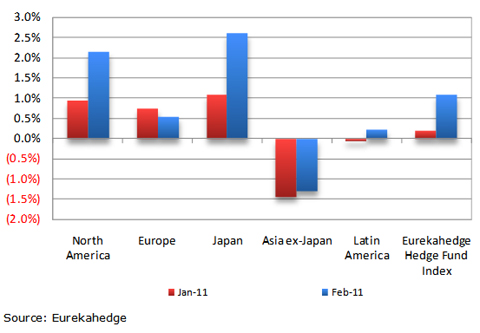 North American and Japanese hedge funds lead the way in the year-to-date return measure with returns of 3.12% and 3.73%, respectively. Investors are starting to look at…