The size of assets under management (AUM) is one of the more common factors many investors use in their initial screening process to come up with a preliminary shortlist of investable funds. Some investors, in particular the larger ones, might be constrained by their necessarily large ticket size, resulting in them only looking at funds above a minimum AUM. Others may be concerned about the costs associated with, and sustainability of, a fund with a small asset size. From our interactions with investors and fund managers over the years, we believe that the threshold AUM for a fund to begin to gain traction with professional investors is US$100 million. We see many new funds launch every year, but few have launch AUM sufficient to be immediately viable for institutional investors. In this research paper, we try to quantify some of the above qualitative observations. We look at the start-up AUMs of funds and how funds with different start-up AUMs performed, as well as their ability to attract capital subsequently.

Our universe consists of funds from the Eurekahedge Emerging Market database with data going all the way back to January 2000. We have included in this study only funds which reported AUM within one year from inception, and we regard the first AUM reported by the fund in its first year of operation as its start-up AUM. We observed that no funds in the database launched with an AUM of more than US$400 million. Large launches rely less on database visibility to raise assets, hence the lack of incentive to list on one. Our eventual universe consists of 510 funds, of which 172 funds had liquidated on or before May 2011.

In this study, funds are grouped into five different groups according to their AUM at inception.
The groups are defined as follow:

We found that over the past 11 years, close to 70% of funds in Asia excluding Japan and Australia launched with an AUM of US$25 million or less. The average launch size of a fund over the same period was just US$23 million.

Funds which launched with AUM of less than US$5 million showed low consistency in outperforming their peers, while funds which launched with an AUM of more than US$75 million consistently underperformed. Our study also showed however, that despite the consistent underperformance it was much easier for a larger fund to raise assets, and these funds were able to raise assets at a much faster rate compared with their smaller counterparts.

The first part of our study looks at the profile of new funds which were launched between 2000 and 2010. 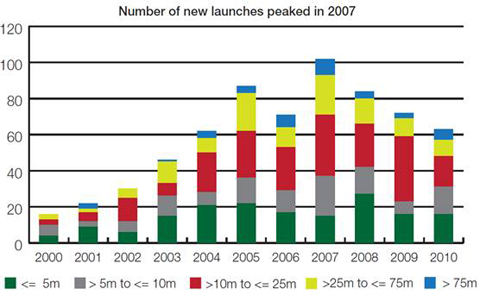 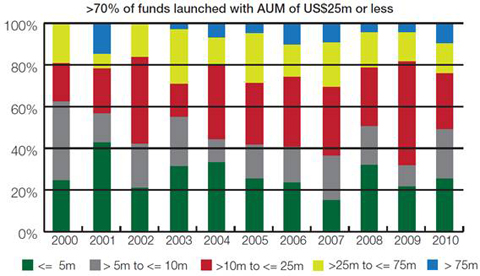 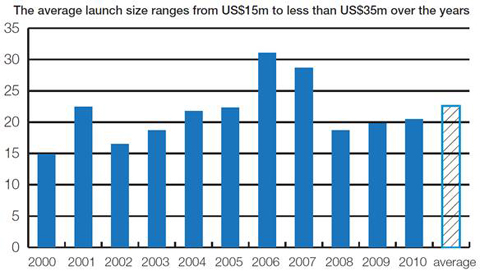 In this next section, we look at funds which are classified as ‘liquidated’ by Eurekahedge. The life span of a fund is the difference between the dead date, as defined by Eurekahedge, and the inception date of the fund. 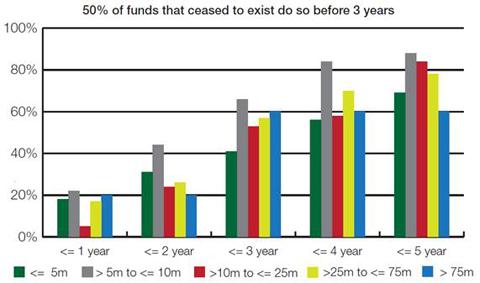 Except for funds with an initial launch size of less than US$5 million, at least 50% of funds which liquidated over the last 11 years do so within the first three years since inception. About 80% of funds which liquidated do so within the first five years since inception, with the exception of the smallest and largest funds; i.e. those which launched with an AUM of less than US$5 million or more than US$75 million. In fact, large funds at launch liquidated either within three years from inception or after five years. 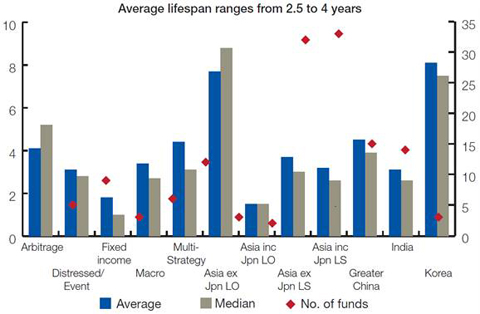 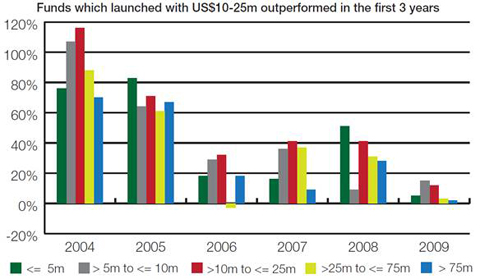 Funds which launched with an AUM of between US$10 million and US$25 million tend to show most consistent outperformance. Funds with an initial AUM of less than US$5 million have three years returns that fluctuate the most, outperforming significantly in two instances but underperforming in the others. Large funds (those with start-up AUM of more than US$75 million) consistently underperformed for all years.

Comparing launch size with the rate of growth of assets

Lastly, we look at the percentage of funds that eventually managed to raise assets beyond US$100 million and US$200 million, and the number of years taken to reach these sizes. 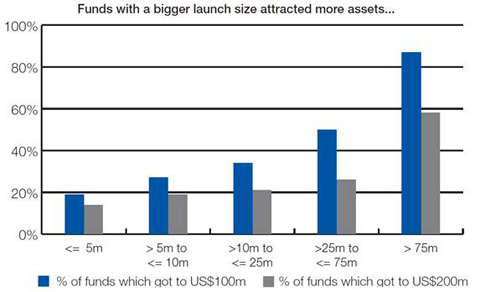 35% of all funds eventually raised assets beyond US$100 million, of which 63% brought assets up to US$200 million or more. It is evident that the larger the fund, the easier it is for a fund to attract capital. 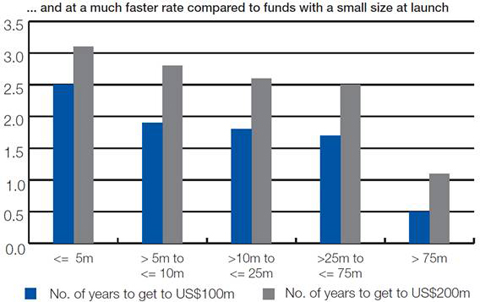 A large proportion of the universe of hedge funds launched with a small asset size of US$25 million or less, and less than half of the universe eventually raised assets to beyond US$100 million. Of funds that liquidated, half ceased to exist within three years from inception.

Despite funds with larger AUM at launch being the weakest performers of all funds, most still managed to gather assets and at a much faster rate.


GFIA, a Singapore-incorporated exempt financial advisor, has provided research on, advice about, and discretionary management of hedge funds since 1998. Almost uniquely, GFIA does not provide marketing services - it is fully objective. GFIA offers to investors a comprehensive range of services, driven by its research and understanding of hedged and absolute return managers in Asia, Latin America and other developing capital markets: management and advice of separate accounts, due diligence and manager analysis,  portfolio construction and discretionary management, advisory services, wealth management services. For more information, please visit www.gfia.com.sg.