Latin American success brought familiar macroeconomic side effects. Growth led to robust employment, rising wages and inflation, which pushed up local currency valuations and the risk that those gains might be reversed. Although Latin American economies have been running hot, policymakers are preparing for the slower growth rates and currency volatility that may come with reduced commodity prices and increased global market dislocation.

Growing asset pools have provided deep liquidity for local capital markets, which have in turn driven down the cost of capital, creating economic growth in a virtuous circle. But positive local investment markets have also left these investment funds with highly concentrated risk. Were a global slip in the price of commodities to impact Latin American economies as a whole, the effect on local investment pools highly exposed to local economies could have a compounding, negative impact.

To mitigate the impact of this kind of scenario, Latin American policymakers are encouraging local investment pools to optimise investment, diversify risk and minimise home country bias. Policymakers have steadily followed the example of Chile, an investment market leader, by allowing for greater allocations to equities and other asset classes, as well as steadily increased offshore investment.

For the time being, investors appear to be taking advantage of high local interest rates and are therefore not maximising their allowable offshore allocations. For example, Chile recently raised international allowances from 70 percent of fund allocations to 80 percent, but in practice, the country's offshore allocations stand at 50 percent.2 Over time, cross-border allocations of Latin American privatised pension funds in aggregate are expected to rise on both an absolute and proportional basis, from US$97 billion (28 percent of assets under management) in 2010 to US$261 billion (39 percent of assets under management) by 2015, as shown in Figure 1. 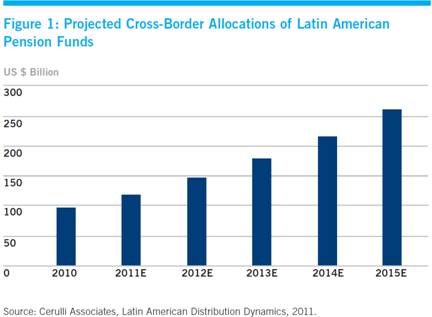 Just as senior economic planners are preparing for a post-boom slowdown, local investment boards, portfolio managers, their international portfolio advisors, and asset management and investment banking partners are using sophisticated portfolio construction approaches to ensure that investment pools are prepared for any downturn. Specifically, they are constructing optimised portfolios that limit the adverse impact of economic event regimes on portfolio returns.

Traditional portfolio construction approaches use insights from the full historical sample of asset returns to derive a strategic asset allocation that delivers optimal performance over the long run. While such unconditioned optimal allocation can be expected to perform well over the historical average of a wide range of economic conditions, under economic event regimes such as high inflation, abrupt shifts in commodity prices or a slowdown in GDP growth, the statistical return properties of portfolio asset classes can change substantially.

In a given economic event regime, certain assets may underperform, and the combination of rising individual asset risk and increased correlations between these assets may drive up overall portfolio risk. Unconditioned optimal portfolios can be rendered suboptimal. But portfolios that are optimised to perform well during a crisis come with a potential downside: if they are too conservative in their allocations, they may not be able to deliver the desired long-term return targets during more normal, less event-driven markets.

A portfolio constructed in this manner seeks to perform better than the unconditioned optimal portfolio during a crisis scenario, without sacrificing too much of the desirable properties of the unconditioned portfolio during calm periods. This model is tested by building an out-of-sample test into the portfolio construction process. Event-sensitive portfolios optimised with this methodology exhibit higher return-to-risk rations during event regimes, at the expense of a slightly lower return-to-risk ratio over the long run. In addition, a decline in tail risk is also observed.3

In undertaking the optimisation of portfolio risk exposures, Latin American investment pools can draw on the precedents and experience of institutional investors around the world similarly charged with building crisis-resistant, geographically diverse allocations. The sovereign wealth funds in Norway, the Middle East and Southeast Asia offer some of the best known examples. Equally significant are the experiences of globally invested pension funds in North America and Europe. Regardless of the region or the specific liability profile of the investment pool, the process of building a portfolio with diverse asset classes and a carefully selected exposure to risk factors is similar.

Just as no two investment pools are the same, portfolio risk models must also be unique; while many aspects of a risk scenario for Brazil may be of relevance to Chile or Peru, it should not be applied without accounting for unique local factors. Among the risk factors that might be brought to bear on this type of portfolio optimisation process are the equity premium, emerging market premium, interest rates, term premium, credit spread, break-even inflation, currency, oil or risk factors based on other commodity prices. In Latin America, Peru and Chile, major exporters of precious and industrial metals, might model for risk events centering on metals markets. In Brazil, where high growth rates and high levels of foreign investment have been the norm, risk factors would likely focus on interest rates, currency valuations and inflation.

Inflation occupies a special place in any Latin American risk scenario. The region has endured famous bouts of hyperinflation and the buoyant economic growth that Latin America experienced in the wake of the financial crisis has exerted steady upward pressure on prices.

In response to the wide-ranging reflationary policies undertaken as a result of the financial crisis, inflation is on the horizon around the world. In developed economies it is rising because of expansive monetary policy, increasing fiscal demands from indebted governments, and the combination of eroding currency valuations and rising commodity prices.

In developing countries, inflation trends are exacerbated by the additional stimulus of high-level capital inflows. While the pass-through from rising commodity prices, expanding consumer demand and credit across to retail prices usually takes more than a year, in rapidly expanding developing economies such as those of present-day Latin America, this can take place in as little as eight months.4 Retail price inflation is particularly critical in Latin America, where robust economic growth has boosted employment and led to price pressures among the burgeoning class of urban, newly middle class citizens.

The rapidly growing economies of Latin America are already experiencing a powerful inflation risk factor in all asset classes and are engineering policies to forestall its impact. For example, in Brazil, policymakers have engineered high interest rates to mitigate overheating, but this has both drawn large inflows of capital investment from abroad and motivated domestic investors to keep their funds in-country where they earn high returns. In an effort to rein in the resulting gains in the value of the Brazilian real, and to discourage speculative trading, the country imposed reserve requirements on the foreign exchange position of domestic banks. Chile undertook similar currency interventions, increasing US dollar reserves in an effort to check the rise of the peso.

The rapidly evolving institutional investment pools of Latin America are in a position to benefit from substantial research and practical portfolio experience in constructing resilient portfolios that are positioned to better weather high inflation, currency market volatility and other economic event regimes. As Latin American economies grow and take their place among other rapidly developing economies, the creation of event-sensitive portfolios by pension funds, sovereign wealth entities and other pooled investment structures can simultaneously build local capital markets and help insulate local investors from a variety of risk factors.

Latin American institutional investment strategies can benefit from the experience of a similarly dynamic, fast-growing and commodity-rich economy to the north: Canada. In 2005, the Canadian government lifted all foreign content restriction rules on the portfolios of Canadians investing in tax-advantaged Registered Retirement Savings Plans (RRSPs).5 Those restrictions, which for 34 years had limited investment outside of Canada to 30 percent (a level that had risen from 20 percent a few years before, and from 10 percent a few years before that), had been intended to facilitate liquid investment in Canadian companies to the benefit of the Canadian economy.

But with Canadian oil fetching high prices, robust economic growth and high levels of international investment in Canada, the economy did not lack for investment. And investors wanting to increase foreign exposure had routinely circumvented the restriction, using derivative investments to build globally allocated clone funds that effectively exceeded the 30 percent foreign limit. Policymakers came to the same conclusion that sophisticated investors had: Canadian investment needed to globalise.

In response to the lifting of restrictions State Street Associates undertook an asset allocation study to examine optimal portfolio weights from a mean variance perspective for Canadians diversifying across global stocks and bonds. Using data from the Pension Investment Association of Canada (PIAC), the study examined restricted and unconstrained allocations and concluded that portfolios with 67 percent allocations to Canada (the PIAC average) were substantially suboptimal, even taking into account the fact that all fund liabilities were priced in Canadian dollars.

The State Street study concluded that the optimal allocation to Canadian securities was less than 7 percent.6 When currency hedging was factored into the asset-liability optimisation, the optimal allocation to Canadian assets actually fell to zero. Perhaps most significantly, the study found that, assuming the same levels of risk, the unconstrained portfolio enjoyed superior than expected returns of 7.27 percent as compared with 6.43 percent for constrained portfolios.

Six years later, Canadian investment strategists face an interesting irony. Despite freedom of asset allocation, a recent study found that wealthy Canadians today hold only 15 percent of their equity portfolios outside of Canada.7 And, at least for the time being, voluntary home country bias has paid off. In an instance of pure coincidence, international investment restrictions were lifted for Canadian investors just as emerging markets in Asia expressed booming demand for Canadian commodity, energy and materials exports.

Today, financial policymakers in Latin America face a dilemma similar to the one confronting their colleagues in Canada: domestic investment, driven by high demand for locally produced commodity, energy and other natural resources, is producing outsized returns. And locally focused investments may continue to outperform for as long as the emerging markets-driven commodity boom drives global growth. But the economies of Latin America and Canada face similarly concentrated risks. Over the long term, portfolio and risk managers caution, global allocation and risk diversification will ultimately produce the most sustainable returns.

7 Jonathan Chevreau, “Ignorance Has Been Bliss for Wealthy Investors: Only 15% Invested Globally,” Financial Post, May 18, 2011.